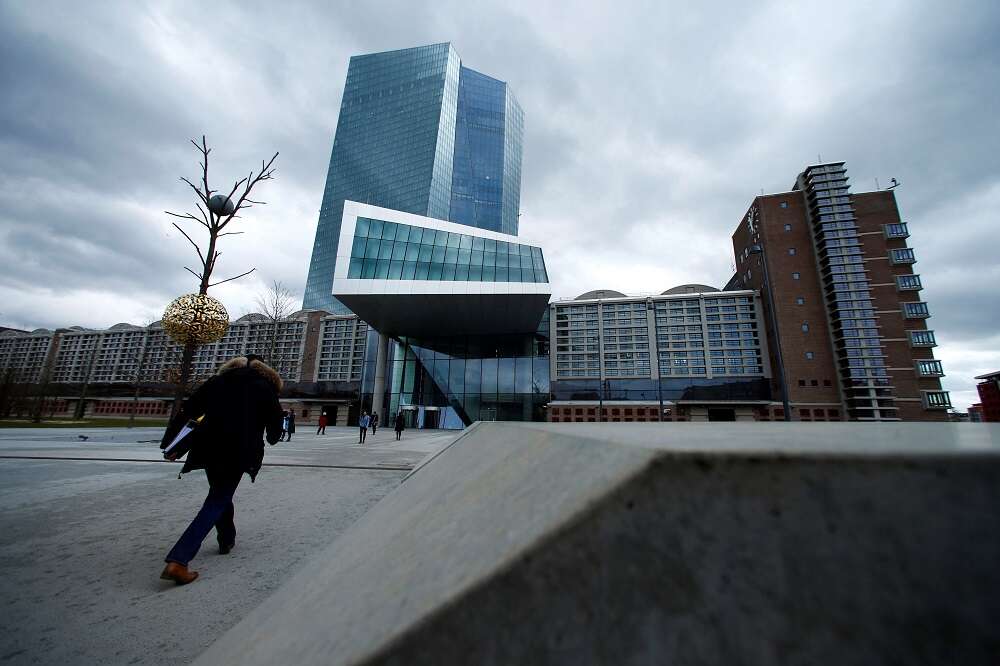 April 28, 2022
Our website publishes news, press releases, opinion and advertorials on various financial organizations, products and services which are commissioned from various Companies, Organizations, PR agencies, Bloggers etc. These commissioned articles are commercial in nature. This is not to be considered as financial advice and should be considered only for information purposes. It does not reflect the views or opinion of our website and is not to be considered an endorsement or a recommendation. We cannot guarantee the accuracy or applicability of any information provided with respect to your individual or personal circumstances. Please seek Professional advice from a qualified professional before making any financial decisions. We link to various third-party websites, affiliate sales networks, and to our advertising partners websites. When you view or click on certain links available on our articles, our partners may compensate us for displaying the content to you or make a purchase or fill a form. This will not incur any additional charges to you. To make things simpler for you to identity or distinguish advertised or sponsored articles or links, you may consider all articles or links hosted on our site as a commercial article placement. We will not be responsible for any loss you may suffer as a result of any omission or inaccuracy on the website.

MILAN (Reuters) – Expectations of rising interest rates have failed to lift valuations of European bank shares languishing at near two-decade lows as a worsening growth outlook weighs on the broader finance industry.

Rising bond yields are a boon for banks as they tend to boost interest income but the strongest two-month jump in borrowing costs seen across the euro zone since 1994 has not translated into stock market outperformance for banks.

A gauge of European bank stocks has shed 6% since the start of March and is not far from 14-month lows hit last month as the war in Ukraine has raised prospects of dragging the region into recession.

That underperformance has also opened up a huge gap with the historically high positive correlation with bond yields, a sign there could be scope for a bounce. A 90-day correlation between MSCI Europe Banks and 10-year German bond yields is at its lowest in over nine years, based on Refintiv data.

U.S. banks have also seen a similar trend, despite the surge in Treasury yields, though to a lesser extent. 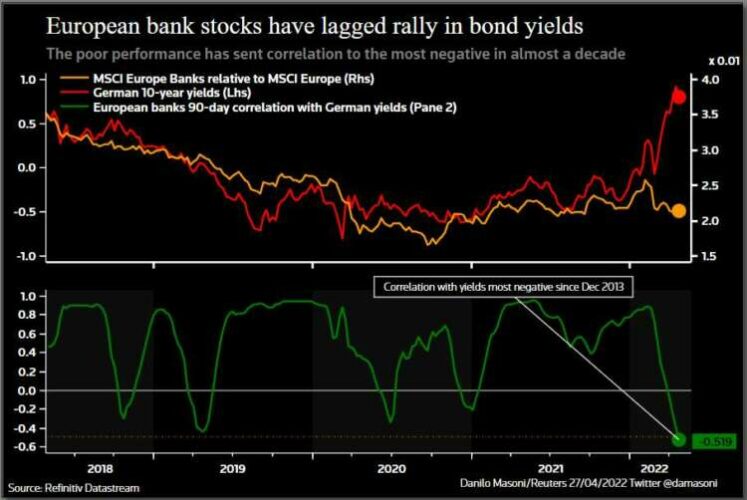 “This is currently one of the big topics among investors and it’s keeping us busy. The correlation used to work very well in the past and the fact it’s broken now can’t be fully explained by macro or geopolitical factors,” said Jerome Legras, head of research at Axiom Alternative Investment in London.

Even if they have recovered from the 2020 pandemic lows, European banks currently trade almost 40% below than their 18-year average valuation, based on a price to book metric, as per Refinitiv data. They trade at 0.3 times the broader market, which is also a nearly 40% discount to the 18-year average.

“The only thing that would justify these levels would be if we were heading towards a recession. That’s what the shares are pricing but at the moment, no economist, no other indicators are,” he added.

UBS has just landed its best profit in 15 years and Deutsche Bank extended its longest profit streak since 2012, although geopolitical and macro uncertainties cloud the outlook.

The concern is that surging commodity prices and rising rates could lead to slower economic activity, reducing deal volumes and fees for banks, while headwinds grow as a consequence of businesses struggling to pay back debt. 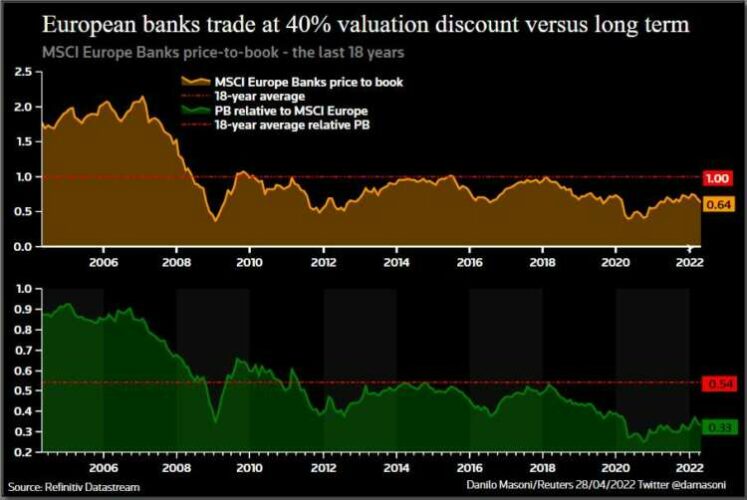 Against this backdrop, Generali Investments, which has around 583 billion euros ($613 billion) of assets under management, recommends maintaining a neutral allocation on banks, even though valuations look attractive.

A London-based hedge fund trader estimates a 20 basis points increase in the cost of risk would erode the benefits of a 100 point move in interest rates.

The ECB is expected to raise interest rates by 80 bps by end-2022 but policymakers are cautious. The Bank of Spain warned of a significant indirect impact from the Ukraine conflict on the country’s economy and its banks.

To be sure, investor positioning across futures markets suggests the return of a degree of optimism for banks over the past week.

“We believe that bond yields and the inflation direction will re-align again with the growth direction, as it was ahead of the geopolitical shock,” JP Morgan strategists said. “This should ensure that the correlations return to historical norms and the gaps that are now evident get filled.”

But that may take a while. Since Russia’s invasion of Ukraine, banks experienced one of the worst twelve-month forward EPS revisions among European sectors, according to Generali Investments. A move to cut off gas supplies to Bulgaria and Poland this week has only heightened recession worries.

“If I were to create a new portfolio from scratch now it would be underweight financials … European growth this year will be clearly lower than what was expected a couple of months ago simply because of this war and the oil price,” said Jerome Schupp, a portfolio manager at Prime Partners in Geneva. 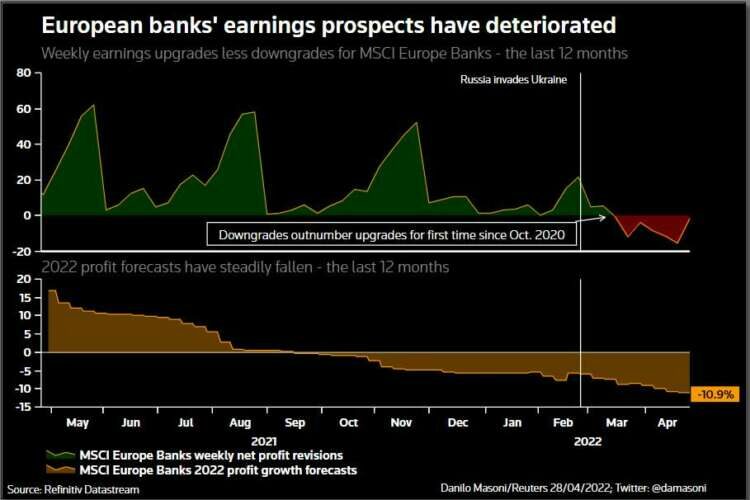 (Reporting by Danilo Masoni in Milan, Julien Ponthus and Samuel Indyk in London; Editing by Saikat Chatterjee and Jane Merriman)