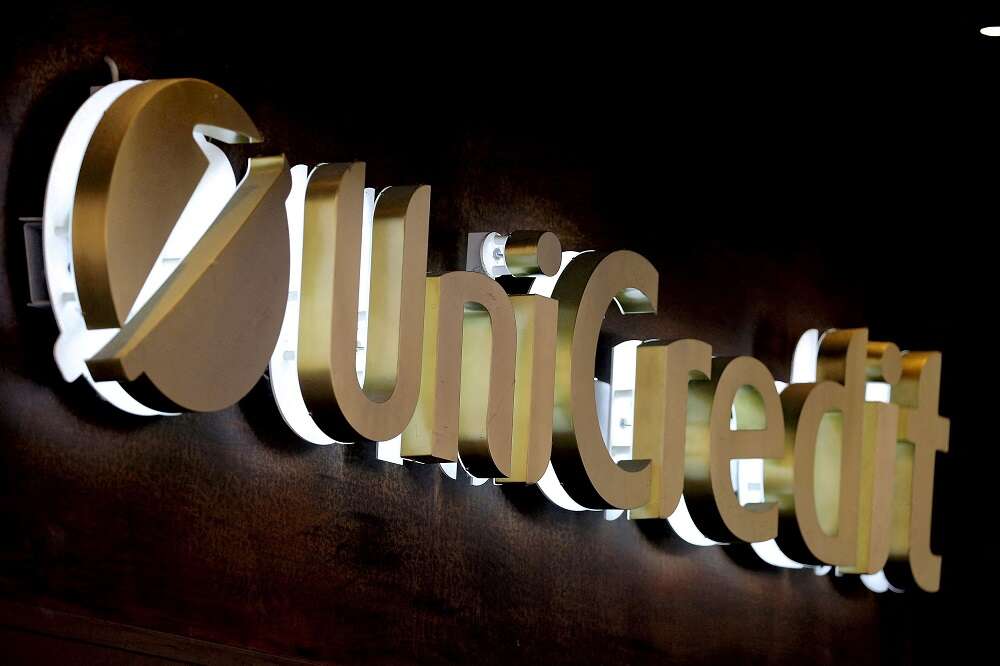 By Valentina Za and Tom Sims

MILAN (Reuters) -UniCredit and Commerzbank shares rose on Wednesday after a newspaper reported the Italian and German lenders had planned to meet to start merger talks before abandoning the idea because of the war in Ukraine.

The Financial Times reported UniCredit CEO Andrea Orcel had arranged to meet his Commerzbank counterpart Manfred Knof with a view to discussing a possible tie-up.

Russia’s invasion of Ukraine on Feb. 24, however, forced Orcel to instead focus on managing the Italian bank’s exposure to Russia, which UniCredit is trying to divest. UniCredit had no comment on the FT report.

A spokesperson for Germany’s No.2 lender said only the bank sought to create the conditions to remain independent.

The two CEOs met earlier this year as part of Orcel’s regular talks with peers at rival lenders, but given the Ukraine conflict, did not touch on mergers and acquisitions, a person briefed on the matter told Reuters on condition of anonymity.

By 1115 shares in Commerzbank rose 4% against a flat European banking stock index.

UniCredit gained 2% after opening little changed with Milan-based traders saying the idea of a potential tie-up was gaining traction.

Analysts noted both UniCredit and Commerzbank trade with a discount of around 70% to their book value.

UniCredit, where German insurer Allianz is a leading investor, had studied a Commerzbank acquisition under previous CEO Jean Pierre Mustier, but the deal encountered political resistance.

Commerzbank is 15.6% owned by the government, which bailed it out more than a decade ago and has undergone a long restructuring.

Milanese broker Equita SIM said the deal would carry high execution risks because it would need 1.5 billion euros ($1.58 billion) in cost cuts to boost earnings per share (EPS) given fragmentation and low profitability in the German banking market.

UniCredit last year failed to clinch a deal with Italy’s Treasury to buy state-owned rival Monte dei Paschi because Rome deemed capital demands excessive after Orcel said he would only consider an acquisition that boosted EPS by 10%.

Commerzbank, whose market value is less than half that of UniCredit, has long been seen as a potential target for UniCredit, which is present in Germany through its HypoVereinsbank unit.

Orcel, the former head of investment banking at Swiss bank UBS, has said UniCredit is constantly reviewing M&A opportunities and is open to deals that boost value for investors and strengthen its franchise in markets where it already operates.

The Ukraine crisis, however, forced UniCredit to set aside 1.2 billion euros against possible losses in the first quarter, limiting the bank’s excess capital and hitting its share price.

(Reporting by Valentina Za in Milan and Tom Sims in Frankfurt; Additional reporting by Claudia Cristoferi; Editing by Keith Weir and Barbara Lewis)

June 29, 2022
Editorial & Advertiser disclosureEditorial & Advertiser disclosureOur website provides you with information, news, press releases, Opinion and advertorials on various financial products and services. This is not to be considered as financial advice and should be considered only for information purposes. We cannot guarantee the accuracy or applicability of any information provided with respect to your individual or personal circumstances. Please seek Professional advice from a qualified professional before making any financial decisions. We link to various third party websites, affiliate sales networks, and may link to our advertising partners websites. Though we are tied up with various advertising and affiliate networks, this does not affect our analysis or opinion. When you view or click on certain links available on our articles, our partners may compensate us for displaying the content to you, or make a purchase or fill a form. This will not incur any additional charges to you. To make things simpler for you to identity or distinguish sponsored articles or links, you may consider all articles or links hosted on our site as a partner endorsed link.