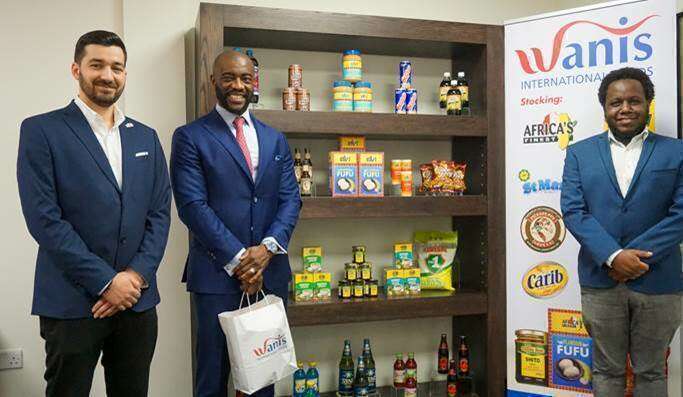 Wanis International Foods, an East London based, food wholesaler, has been honoured with a Queen’s Award for Enterprise.

Trading for nearly six decades, since Queen Elizabeth was in her mid-thirties, Wanis has been recognised for its excellence in Enterprise in International Trade, having seen five years of uninterrupted growth. They were also commended for their commitment to equality and diversity and their strong record of charitable and philanthropic work locally, nationally and internationally.

Employing 165 team members from upwards of 30 international backgrounds, Wanis was founded in 1964, serving the UK’s first wave of independent African, Asian and Caribbean food stores, helping them to bring ‘the taste of home’ to the UK’s migrant communities for whom food was key to staying connected to their cultures and traditions.

A family owned and run company, Wanis’ annual turnover recently passed the £100million  mark, and with clients including all of the major supermarket chains, hundreds of wholesalers and thousands of independent retailers nationwide, the company looks set to go from strength to strength.

Commercial Director, George Phillips said: “On behalf of all of the team here at Wanis, we are absolutely thrilled to receive this award, particularly in the year of Her Majesty’s platinum jubilee and of course, the Commonwealth Games, especially as we have significant trade partnerships with many Commonwealth countries. We all worked hard during the pandemic to keep the shelves of UK retailers stocked, so this accolade means a lot to the whole team.”

Now in its 56th year, the Queen’s Awards for Enterprise are the most prestigious business awards in the country, with winning businesses able to use the esteemed Queen’s Awards Emblem for the next five years.

Battling Cloud Complexity: How to manage and optimise costs of the public cloud

MariaDB Puts $25K on the Table in Distributed...

MOXY BRISTOL IS HERE TO PLAY

Creating a Marketing Strategy for your Business

May 5, 2022
Editorial & Advertiser disclosureEditorial & Advertiser disclosureOur website provides you with information, news, press releases, Opinion and advertorials on various financial products and services. This is not to be considered as financial advice and should be considered only for information purposes. We cannot guarantee the accuracy or applicability of any information provided with respect to your individual or personal circumstances. Please seek Professional advice from a qualified professional before making any financial decisions. We link to various third party websites, affiliate sales networks, and may link to our advertising partners websites. Though we are tied up with various advertising and affiliate networks, this does not affect our analysis or opinion. When you view or click on certain links available on our articles, our partners may compensate us for displaying the content to you, or make a purchase or fill a form. This will not incur any additional charges to you. To make things simpler for you to identity or distinguish sponsored articles or links, you may consider all articles or links hosted on our site as a partner endorsed link.