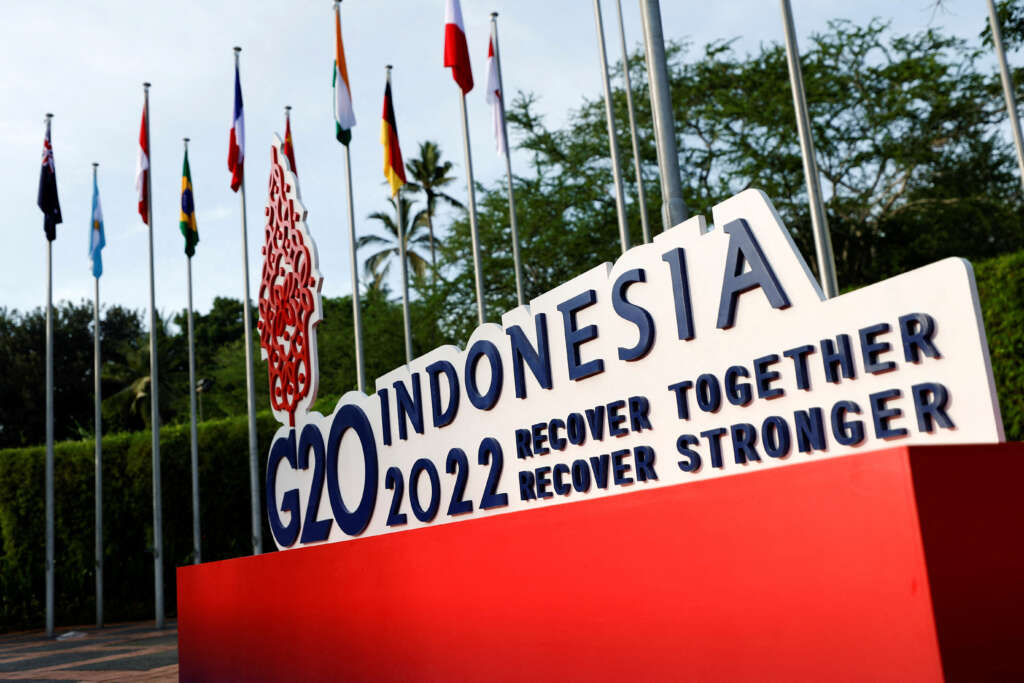 For host Indonesia, a G20 summit dogged by Russia-Ukraine rancour

November 14, 2022
Our website publishes news, press releases, opinion and advertorials on various financial organizations, products and services which are commissioned from various Companies, Organizations, PR agencies, Bloggers etc. These commissioned articles are commercial in nature. This is not to be considered as financial advice and should be considered only for information purposes. It does not reflect the views or opinion of our website and is not to be considered an endorsement or a recommendation. We cannot guarantee the accuracy or applicability of any information provided with respect to your individual or personal circumstances. Please seek Professional advice from a qualified professional before making any financial decisions. We link to various third-party websites, affiliate sales networks, and to our advertising partners websites. When you view or click on certain links available on our articles, our partners may compensate us for displaying the content to you or make a purchase or fill a form. This will not incur any additional charges to you. To make things simpler for you to identity or distinguish advertised or sponsored articles or links, you may consider all articles or links hosted on our site as a commercial article placement. We will not be responsible for any loss you may suffer as a result of any omission or inaccuracy on the website.

(Reuters) – Group of 20 leaders meet on Tuesday under very different circumstances than those host Indonesia envisioned when it began planning the summit last year, with Russia’s invasion of Ukraine hanging over proceedings even in the absence of Russia’s leader.

Indonesia, the world’s fourth-most populous country and Southeast Asia’s largest economy, assumed the chair of the G20 in December with plans to focus on recovery from the coronavirus pandemic and boosting the interests of developing nations.

Instead, Russia’s invasion of Ukraine in February threw the word into turmoil and threw Indonesia’s preparations for the summit out of kilter, forcing it into a high-stakes struggle to manage divergent demands and ensure the summit on the island of Bali takes place.

“Just keeping the meeting together is already a big achievement,” said Jose Rizal, executive director of the Centre for Strategic and International Studies in Jakarta.

Russia’s Feb. 24 invasion of its southern neighbour sparked calls by some Western leaders for a boycott of the G20 summit and for the withdrawal of Russian President Vladimir Putin’s invitation.

But Indonesia, closely associated from the 1950s with the formation of the non-aligned movement, has instead focused on its “bebas dan aktif”, or “free and active” foreign policy, a position of non-alignment born out of the Cold War, to try to keep the peace amid the global fractures, analysts say.

Indonesia has held its ground on Russia, refusing to withdraw Putin’s invitation, and also rejecting what Indonesian sources say has been pressure from G7 countries to condemn Russia at the summit this week.

President Joko Widodo, who has not previously focussed on international affairs, travelled to Kiev and Moscow in June to meet Putin and Ukrainian President Volodymyr Zelenskiy, whom he also invited to the summit.

Jokowi, as the president is known, has been particularly focused on food and energy insecurity that has resulted from the war in Ukraine, in no small part because Indonesia is one of the world’s largest importers of wheat.

Russia confirmed at almost the last minute that Putin would not attend the summit with Foreign Minister Sergei Lavrov taking his place. Ukraine’s Zelenskiy is due to address the summit via video link.

“It’s like a family wedding where one member of the family is a black sheep, but you can’t not invite them, but which table do you put them at?” said Dewi Anwar, a research professor at Indonesia’s National Research and Innovation Agency.

In a recent interview with Reuters, Indonesian Foreign Minister Retno Marsudi described this year’s G20 as possibly the most fraught to date, with countries in some cases taking days to agree on the use of a single word.

Indonesia will breath a sigh of relief as the summit opens but key issues remain unresolved.

A joint communique, which would need to be agreed by all parties, appears unlikely, with Indonesia instead pushing for a leaders’ declaration, diplomatic sources say.

But even that could be thorny, according to a European diplomat.

“We have to make sure that Russia’s war is mentioned in the G20 declaration in one way or another. It can’t be business as normal. But that is extremely difficult,” the diplomat said,

“My estimate is that at the moment, 10 of the G20 countries are against criticizing Russia harshly in the declaration.”

A traditional G20 “family photo” of leaders also appears to be off the table this year, sources say.

While Indonesia recently condemned at the U.N. General Assembly Russia’s declaration of its “annexation” of four Ukrainian territories, Jokowi has maintained the G20 should primarily be an economic forum.

“‘Free and active’ means you have some independence and also discretion to choose which forum to fight for which battle, and Indonesia is very adept at that,” said Anwar, arguing that the G20 should not be “held hostage” to one issue.

“At the end of the day the planet still revolves, climate change continues, and the pandemic continues to be a major threat.”

Amid the geopolitical tension one clear win for G20 chair Indonesia, which has struggled with coronavirus vaccine equity, is the creation of a pandemic preparedness fund and pledges for it of $1.4 billion.