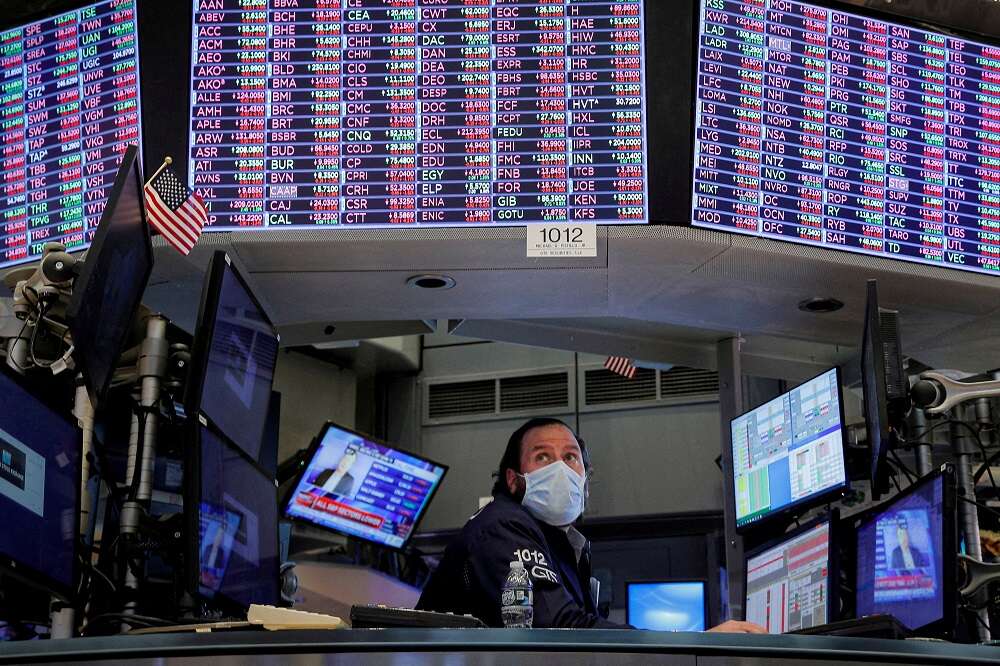 By Sujata Rao and Lewis Krauskopf

The wild gyrations that have been a hallmark of markets in recent weeks continued on Monday, as the rouble lost nearly a third of its value, investors sought safety in government bonds and the dollar and major indexes in Europe and the United States pared initial sharp losses.

Though few expect the volatility to quiet down anytime soon, some were looking for opportunities in stocks they believe may have grown cheap after a weeks-long selloff that has taken the S&P 500 down 8% in 2022 and shaved 7% off Europe’s STOXX 600, as they bet that strong earnings will buoy stock prices.

“On a fundamental basis the world economy is in reasonable shape, earnings are strong and we are not expecting a (global) recession,” said Fahad Kamal, chief investment officer at Kleinwort Hambros. “The range of outcomes is very wide but in the long run we invest based on several metrics … Those things do not scream panic,” he said.

The S&P 500 recently traded at around 19.7 times forward earnings, from around 22 times at the beginning of the year after losing more than $3 trillion in value year-to-date. Data from Refinitiv also indicates that U.S. and European companies overall are expected to increase earnings this year by about 8%.

“Russia-Ukraine tension is a low earnings risk for US corporates, but an Energy price shock amidst an aggressive central bank pivot focused on inflation could further dampen sentiment/growth,” JPMorgan analysts said in a note.

Still, others were betting that the recent geopolitical uncertainty would mitigate monetary tightening from central banks, a factor that has weighed heavily on stocks in recent weeks.

BlackRock strategists said the Ukraine crisis “has reduced the risk of central banks slamming the brakes to contain inflation.” The strategists said they were “tactically” upgrading equities, noting they believe “market expectations of rate hikes have become excessive and have created opportunities in equities.”

Markets are pricing in nearly 150 basis points of Federal Reserve tightening by next February, including a widely expected rate increase in March. However, odds of a hefty 50 basis-point hike next month are down to about 7% from 22% chance estimated 10 days ago, according to the CME Group’s FedWatch tool.

Analysts at UBS Global Wealth Management, meanwhile, advised clients to increase their exposure to raw materials to buffer portfolios against inflation. The conflict between Russia, one of the world’s largest commodity exporters, and Ukraine has already helped push up oil prices to their highest level since 2014, while U.S. inflation last month grew at its fastest pace in nearly four decades.

King Lip, chief strategist at Baker Avenue Asset Management in San Francisco, was shifting more of client portfolios to commodities, through an Invesco ETF with diverse exposure to commodities, which generally are expected to benefit in inflationary environments. “We were buying it already because of the inflation hedge and now we just think it is going to have more tailwinds on it because you are going to have supply disruptions,” Lip said.

But many remained wary. Goldman Sachs recently cut forecasts for the STOXX 600 pan-European equity index and the FTSE, noting the knock-on effect on production costs and GDP to Europe, which is heavily dependent on Russia for its energy needs. They said, however, that corporate balance sheets were strong and called the conflict “largely one that raises the risk premium rather than derails the recovery.”

Generali Investments equity strategist Michele Morganti predicted another 5% downside, based on previous risk premia spikes during the financial crisis of 2008 and the onset of the coronavirus pandemic in 2020.

“Looking further ahead though, there’s a sense it will probably get worse before it gets better,” Morganti told clients. “Markets remain event-dependent, and we would refrain from aggressively buying current dips.”

SAP and BearingPoint partner on the race to emission zero