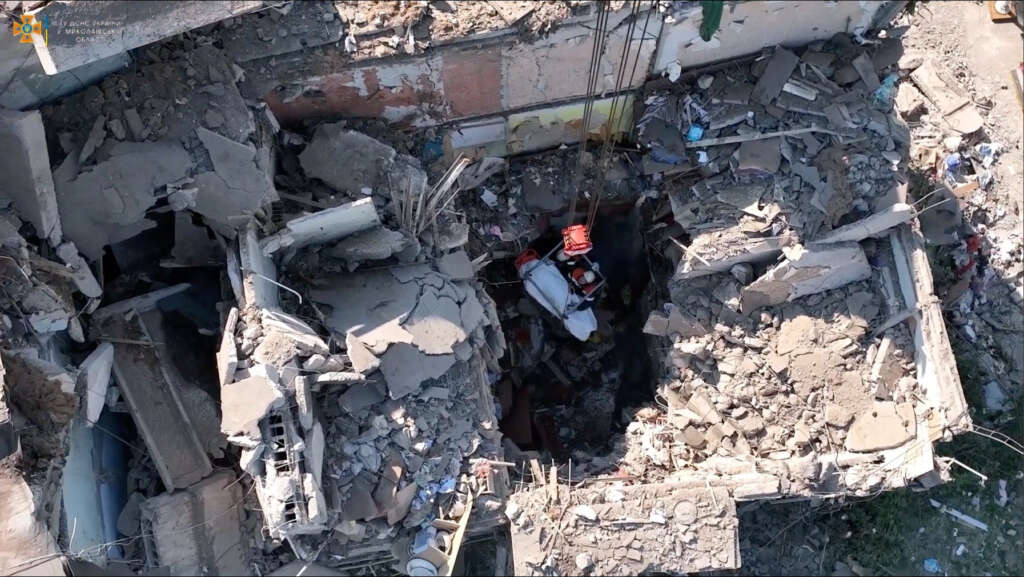 KYIV (Reuters) – Russian forces struck targets in the Mykolaiv region of southern Ukraine on Wednesday and intensified attacks on fronts across the country as NATO members met in Madrid to plan a course of action against the challenge from Moscow.

Ukrainian President Volodymyr Zelenskiy told the NATO leaders his country needed more weapons and money to defend itself against Russia, warning that Moscow’s ambitions did not stop at Ukraine.

At the summit, President Joe Biden announced additional U.S. land, air and sea deployments across Europe, including a permanent army headquarters in Poland, in response to threats from Russia.

The mayor of Mykolaiv city said a Russian missile strike killed at least three people in a residential building there, while Moscow said its forces had hit what it called a training base for foreign mercenaries in the region.

In the east, the governor of Luhansk province said there was “fighting everywhere” in the battle around the hilltop city of Lysychansk, which Russian troops were trying to encircle.

The governor of Kryvyi Rih in central Ukraine said Russian shelling had increased there too in the past few days.

“Several villages have been wiped from the face of the earth,” Kryvyi Rih governor Oleksander Vilkul said.

The stepped-up attacks – following a missile strike on a shopping mall killed at least 18 people in central Ukraine on Monday – come as Russian President Vladimir Putin’s forces make slow but relentless progress in a war now in its fifth month.

Nonetheless, Western analysts say the Russians are taking heavy casualties and running through resources, while the prospect of more Western weapons reaching Ukraine, including long-range missile systems, made Moscow’s need to consolidate any gains more urgent.

Far from the fighting, leaders of NATO countries were meeting in the Spanish capital Madrid to thrash out policy in response to Russia’s actions.

Zelenskiy, in a video link-up from the capital Kyiv, demanded more weapons from the West and said Ukraine needed $5 billion per month for its defence and protection.

Russia would set its sights on other countries, he warned, saying Moscow wanted to “enslave” NATO-member Lithuania.

“This not a war being waged by Russia against only Ukraine. This is a war for the right to dictate conditions in Europe – for what the future world order will be like,” he said.

The new U.S. Army headquarters in Poland announced by Biden at the summit, with an accompanying battalion, would be the first permanent U.S. deployment on NATO’s eastern flank.

Biden’s plans also include sending extra warships to Spain, fighter jet squadrons to Britain, ground troops to Romania, air defence units to Germany and Italy, and a range of assets to the Baltics.

The NATO summit will also welcome membership applications from formerly neutral Sweden and Finland, which overcame objections from Turkey.

Russia has long complained about a perceived expansion of Western blocs towards its borders, but its invasion of Ukraine – which it calls a “special military operation” – has served to give new impetus to NATO. The European Union has also awarded Ukraine candidate status in light of the invasion.

In Moscow, Russian Deputy Foreign Minister Sergei Ryabkov said NATO’s expansion was “destabilising” and did not add to its members’ security.

Russia’s defence ministry said its forces carried out strikes on a military training base for “foreign mercenaries” near the city and also hit ammunition fuel storage. Reuters was not able to independently verify the reports.

A river port and ship-building centre just off the Black Sea, Mykolaiv has been a bastion against Russian efforts to push West towards Ukraine’s main port city of Odesa. Governor Vitaliy Kim said Russian shelling had increased and mostly civilian buildings were being hit.

“It is dangerous in Mykolaiv now, more dangerous than three weeks ago,” he said.

Wednesday’s Mykolaiv strikes took place just two days after a Russian missile hit the shopping mall in Kremenchuk. Rescuers there were still searching for dozens of missing on Wednesday.

Pope Francis joined the international condemnation of the Kremenchuk attack, calling it “barbarous”.

Moscow has denied targeting the mall and said it had struck an arms depot nearby, which exploded.

Britain’s Ministry of Defence said it expected Russia to continue making strikes in an effort to hamper Ukrainian resupplies to the frontlines, and more civilian casualties were likely.

Russia has denied targeting civilian areas but the United Nations says at least 4,700 civilians have been killed since Russia invaded Ukraine on Feb. 24. Ukraine believes the true civilian toll is many times higher.

Fighting also raged further east in Luhansk province, a key battleground in Russia’s assault on the industrial heartland of the Donbas region.

“There is fighting everywhere. The enemy is trying to break through our defences,” Luhansk governor Serhiy Gaidai said on television.

The battle for Lysychansk in Luhansk follows the fall of Sievierodonetsk, its sister city across the Siverskyi Donets River on Saturday.

Its capture would expand Russian control of the Donbas, one of Moscow’s strategic objectives since its failure to seize Kyiv in the war’s early stages.

Kherson, a port city on the Black Sea, sits just northwest of the Russian-annexed Crimean peninsula.

NATO deal with Turkey greeted with caution and concern in Sweden

Risk of new wildfires in southwestern France as...

August 9, 2022
Editorial & Advertiser disclosureEditorial & Advertiser disclosureOur website provides you with information, news, press releases, Opinion and advertorials on various financial products and services. This is not to be considered as financial advice and should be considered only for information purposes. We cannot guarantee the accuracy or applicability of any information provided with respect to your individual or personal circumstances. Please seek Professional advice from a qualified professional before making any financial decisions. We link to various third party websites, affiliate sales networks, and may link to our advertising partners websites. Though we are tied up with various advertising and affiliate networks, this does not affect our analysis or opinion. When you view or click on certain links available on our articles, our partners may compensate us for displaying the content to you, or make a purchase or fill a form. This will not incur any additional charges to you. To make things simpler for you to identity or distinguish sponsored articles or links, you may consider all articles or links hosted on our site as a partner endorsed link.