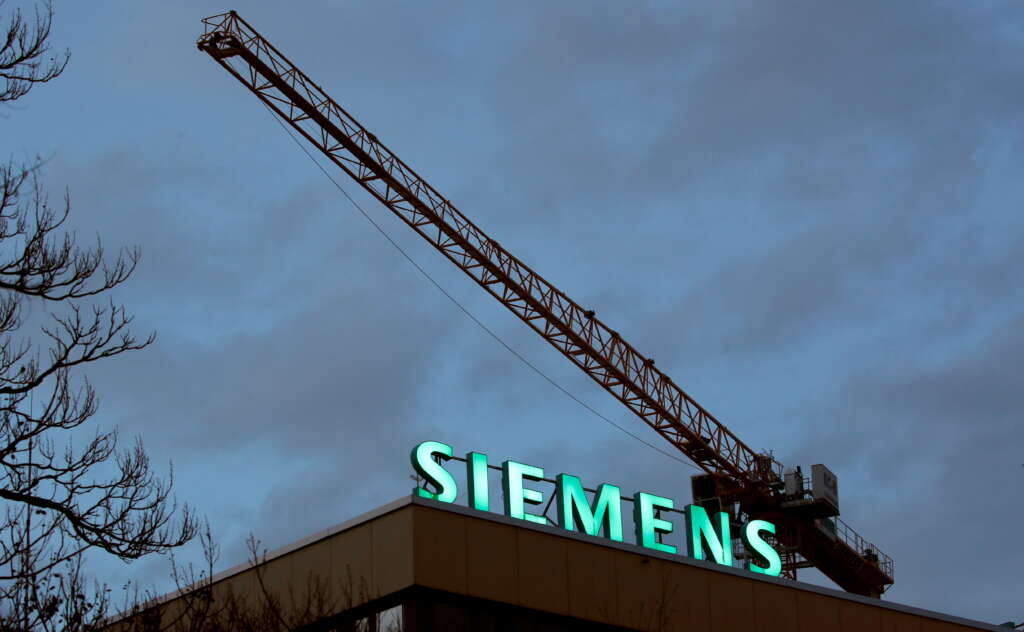 ZURICH (Reuters) -Siemens became the latest industrial firm to report a post-pandemic surge in demand, prompting the German engineering and technology company on Thursday to raise its profit guidance for the third time this year.

The trains-to-industrial software maker said it was seeing a broad-based increase in demand as customers around the world rebuilt their inventories and vaccination campaigns accelerated the economic recovery.

The Munich company said its orders surged by 47%, driven by double digit growth in factory automation and smart infrastructure.

As a result Siemens hiked its profit guidance for the third time in its 2021 business year, following previous increases in February and May.

It now expects full year sales and profit to be higher than previously thought after beating forecasts for sales, profit and orders during the third quarter.

“Siemens is consistently pursuing its goal of accelerated high-value growth. In the third quarter, once again we delivered – with strong and profitable growth in all businesses,” Chief Executive Roland Busch said in a statement.

Shares in Siemens were indicated up 1.6% in Lang & Schwarz premarket trade.

Higher raw materials prices and supply chain bottlenecks – for example in semi conductor chips – remained a problem, but were being overcome, he said.

Adjusted operating profit at Siemens’ industrial business rose 29% to 2.32 billion euros ($2.75 billion) in the three months to the end of June, beating the 2.09 billion euros in a company-gathered consensus of analyst forecasts.

The company said it now expects its full year revenue to rise by 11% to 12%, up from its previous view for an increase of 9% to 11%, boosted by higher sales of its factory automation and smart infrastructure businesses.

Other industrial companies have recently upped their guidance based on the faster than anticipated post-pandemic recovery in many sectors and stronger demand in China and the United States as their economies rebound.

Businesses need to look beyond their own security...

THE ULTIMATE INTERNAL LINKING GUIDE FOR SMEs and...

September 14, 2021
Editorial & Advertiser disclosureEditorial & Advertiser disclosureOur website provides you with information, news, press releases, Opinion and advertorials on various financial products and services. This is not to be considered as financial advice and should be considered only for information purposes. We cannot guarantee the accuracy or applicability of any information provided with respect to your individual or personal circumstances. Please seek Professional advice from a qualified professional before making any financial decisions. We link to various third party websites, affiliate sales networks, and may link to our advertising partners websites. Though we are tied up with various advertising and affiliate networks, this does not affect our analysis or opinion. When you view or click on certain links available on our articles, our partners may compensate us for displaying the content to you, or make a purchase or fill a form. This will not incur any additional charges to you. To make things simpler for you to identity or distinguish sponsored articles or links, you may consider all articles or links hosted on our site as a partner endorsed link.