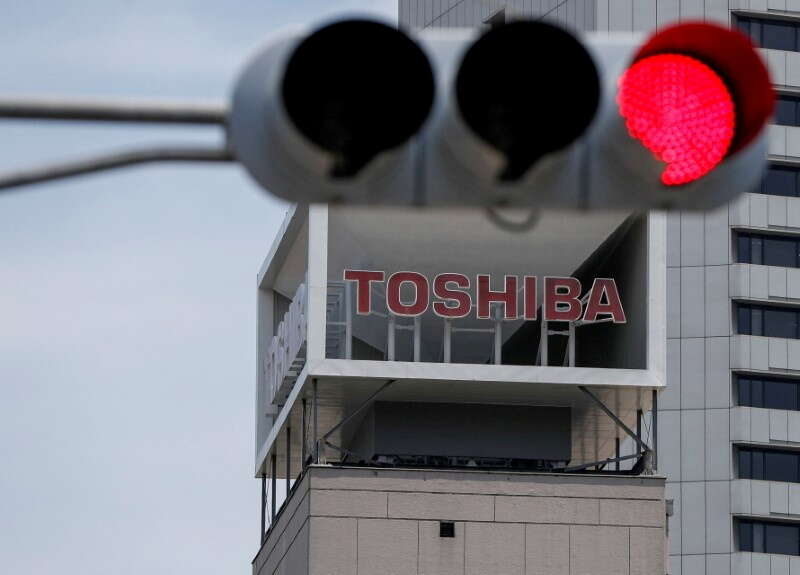 By Makiko Yamazaki and Scott Murdoch

TOKYO/HONG KONG (Reuters) -Toshiba Corp is in talks with at least four global private equity firms including KKR & Co Inc and Blackstone Inc to seek their ideas for its new strategy, three sources with knowledge of the matter said.

Bain Capital and Canadian investment firm Brookfield have also been tapped by the scandal-hit Japanese conglomerate’s strategic review committee to put together and submit their ideas for Toshiba, the sources said.

The latest process is not meant to formally solicit buyout bids for the overall company or some of its assets, and it’s not immediately clear whether the engagement with buyout firms will result in formal offers in the future.

The step, however, indicates that Toshiba is engaging with potential bidders since shareholders ousted its chairman in June after the company was found to have colluded with the Japanese government to put pressure on foreign investors https://www.reuters.com/world/asia-pacific/independent-probe-says-toshiba-agm-last-year-was-not-fairly-managed-2021-06-10.

After the chairman’s ouster, Toshiba, which has many lines of business and units and operates in several jurisdictions, launched a full review of its current assets, and also pledged to engage with potential strategic and financial investors.

“As announced, Toshiba’s strategic review committee is considering and discussing a wide range of initiatives without delay,” Toshiba said in a statement to Reuters.

Toshiba, which had a market valuation of about $19 billion as of Wednesday, “plans to present the achievements when we announce the new business plan in October”, it said, but declined to comment further.

Spokespersons at Bain, Blackstone and KKR declined to comment, while Brookfield did not immediately respond to a Reuters request.

The sources declined to be identified as the talks were private.

At an earnings briefing this month, Toshiba Chief Executive Satoshi Tsunakawa said the company https://www.reuters.com/article/ctech-us-toshiba-results-idCAKBN2FD0E6-OCATC had been “vigorously engaged in dialogue not only with shareholders but also with financial and strategic investors.”

He also said that the company was open to take private bids although it had not received any offers since a $20 billion takeover https://www.reuters.com/article/toshiba-ma-idCNL1N2MD0J4 bid from CVC Capital Partners, which was subsequently dismissed in April as lacking details.

Toshiba’s move to talk with the private equity funds has puzzled some investors who have questioned why the company has not started an official process to elicit bids.

In June, an investigation concluded Toshiba colluded with Japan’s trade ministry to block investors from gaining influence at last year’s shareholders meeting – a finding that put governance at Japan Inc under the spotlight.

Toshiba, whose products range from escalators to seweverage, remains one of Japan’s few manufacturers of nuclear power reactors and makes defence equipment, meaning any sale of the company would need government approval.

How has the car parts industry been shaped by the pandemic?

Amazon and others commit to using zero-carbon shipping...

Shareholders more likely to support eco-initiatives if they...

From office to workspace – how we work...

Sprout Pencil: From a student invention to a...

Covid and its challenges

McDonald’s milkshakes off the British menu after supply...

August 24, 2021
Editorial & Advertiser disclosureEditorial & Advertiser disclosureOur website provides you with information, news, press releases, Opinion and advertorials on various financial products and services. This is not to be considered as financial advice and should be considered only for information purposes. We cannot guarantee the accuracy or applicability of any information provided with respect to your individual or personal circumstances. Please seek Professional advice from a qualified professional before making any financial decisions. We link to various third party websites, affiliate sales networks, and may link to our advertising partners websites. Though we are tied up with various advertising and affiliate networks, this does not affect our analysis or opinion. When you view or click on certain links available on our articles, our partners may compensate us for displaying the content to you, or make a purchase or fill a form. This will not incur any additional charges to you. To make things simpler for you to identity or distinguish sponsored articles or links, you may consider all articles or links hosted on our site as a partner endorsed link.